One of the significant tasks in the post-production of videos is editing the footage. Therefore, video editing is one of the tasks that require high computer specs if you are to complete them without much stress. Part of the high specs is the usage of SSD as a storage tool, hence the need to know the best SSD for video editing. Choosing the best SSD for your video editing needs might just be the final piece of the puzzle for you. 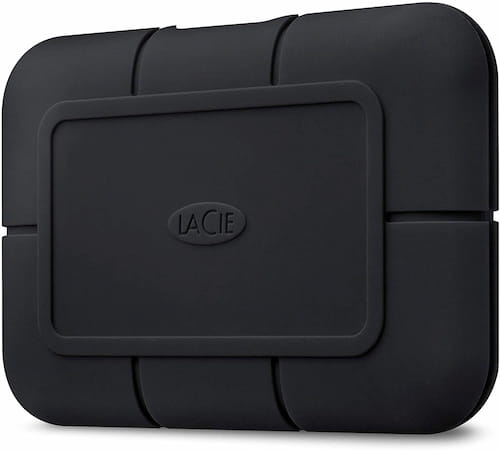 This drive is a typical example of lightning-fast and durable and the best external SSD for video editing. The Lacie rugged pro uses a thunderbolt 3 interface on the system side but is compatible with USB Type-C 3.1 Gen 1 or 2. The read/write speed of 2800MBps shouldn’t come as a surprise because it combines the NVMe support with the thunderbolt 3 interface and, of course, a PCIe 3.0 X4 bus type.

This SSD is IP67 rated (dust and water-resistant and can survive 30 minutes submerged in shallow water). On Top of this, it has been built to withstand weights up to 2000kg and drops less than 3 meters.

Although it attracts a high price, you will be getting premium services. Lacie Rugged SSD pro comes in 1TB and 2TB capacities. It’s a perfect device for high-resolution video editing, and you don’t have to be worried about your data because it also has an AES 256-bit protection for data security. 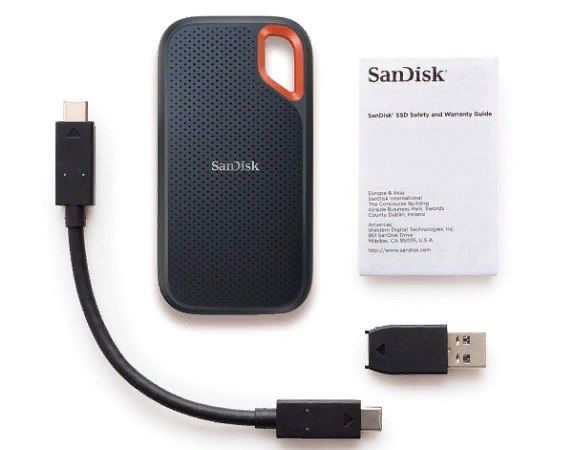 The SanDisk Extreme Portable SSD V2 has a read speed of 1050MBps and a write speed of 1000MBps. It uses a PCI express 3.0 x4 bus type and has NVMe Support for fast transfer speeds. In addition, this SSD has a USB Type-A or Type-C interface for the computer and USB 3.2 Gen 2 protocols.

The SanDisk Extreme Portable SSD V2 is a good representation of what is desired in an external SSD. It has capacity options of 500GB, 1TB, and 2TB for different needs. It is most recommended for its durability, and it does not disappoint in other significant areas too.

This external SSD is IP55 rated, which means it is dust and water-resistant. It also has features that protect it from drops less than 2 meters. Most importantly, it is 256-bit hardware encrypted to protect data on the SSD for its durability. 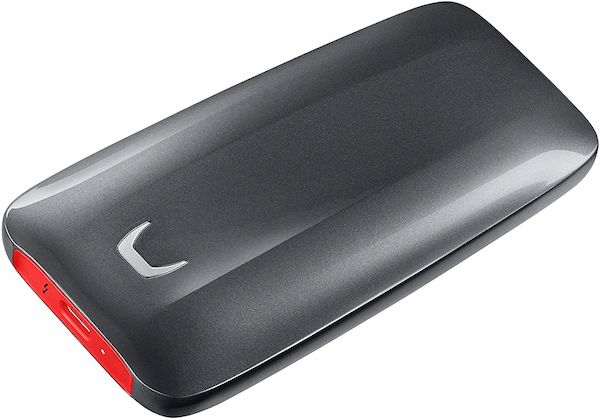 We already know Samsung’s name comes with the class, and this external drive is not an exception. It also has 500GB, 1TB, and 2TB capacities. In addition, this external SSD has an excellent sequential read and write speed of 2800MBps and 2300MBps, respectively.

The Samsung X5 has a Thunderbolt 3 interface which should come as no surprise because of its read/write speed. This can be a disadvantage, though, because it is not backward compatible with thunderbolt 2 or USB type-C. Despite this, it’s one of the fastest and rugged SSD in the market.

The chip is 256-bit encrypted for data protection. It is also built to withstand drops from less than 2 meters. Unfortunately, the Samsung X5 becomes warm and reduces its efficiency after usage for a while, although it has a Dynamic Thermal Guard Technology. 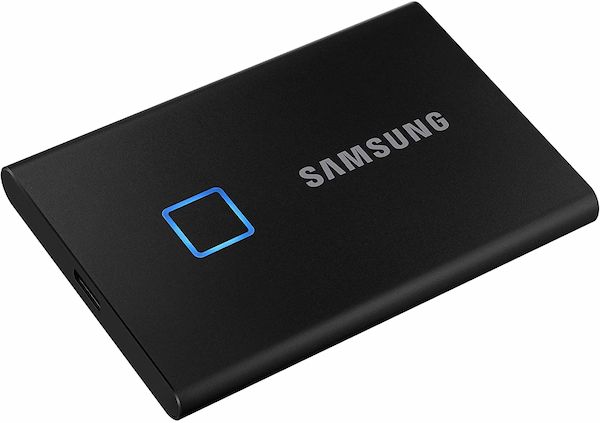 Like the Samsung X5, this external SSD also exudes class. It has 2 variants – one with fingerprint security and one without. However, both are 256-bit encrypted for proper protection, and there is a difference in their cost.

Where the X5 lacks, Samsung has managed to up the ante with this SSD. While efficiency drops after a while on the X5 because it gets warm, Samsung added a phase-change layer that helps to keep the temperature cool. This means video editors don’t have to worry when transferring large files.

The Samsung T7 has a read and write speed of 1050MBps and 1000MBps, respectively. It uses a PCIe 3.0 X4 bus type and has a USB Type-A or Type-C interface for the computer side. Although it’s not IP rated, it can withstand drops less than 6.5 feet. It comes in 500GB, 1TB and 2TB capacity options for users. 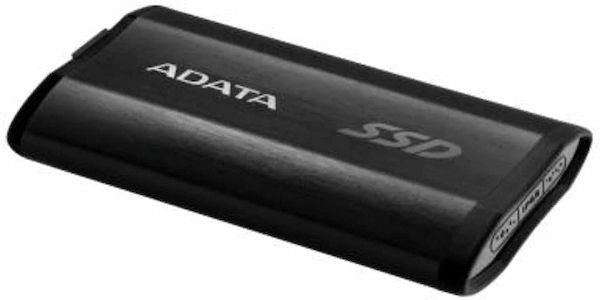 The ADATA SE800 is probably the most rugged external SSD in the market because of its IP68 rating (dust-resistant, water-resistant, and can survive being submerged at a depth of 1.5m for less than 30 minutes). Apart from this, it can withstand drops from heights of up to 4 feet.  Its rugged features are not the only good quality it possesses though.

With a reasonable value per gigabyte, the ADATA SE800 delivers a sequential read/write speed of 1000MBps. However, the real-life read and write rate is around 930MBps and 670MBps, respectively, which is still satisfactory for video editors. This SSD uses the PCIe 3.0 X4 bus type, and it’s NVMe supported.

It has a rubber flap covering the USB Type-C port, which leads to a USB Type-C or Type-A on the computer side. And of course, the protocol is USB 3.1 Gen 2. In addition, the ADATA SE800 is 256-bit encrypted for good data protection.

What Are Solid State Drives (SSD)?

To know what an SSD is, we need to start from the very beginning. Phones, computers, tablets, and the likes have a space for storing files called memory. There are two types of memory, the Read-Only Memory (ROM) and the Random Access Memory (RAM). The SSD belongs to the former, while the RAM stores our working files and helps us access them easily without shutting the apps down.

On the other hand, ROM is the space where our files are kept in the long term. As a video editor, the most critical files will be the raw, unedited video files and the edited footage. Hence the ROM of a computer is also essential to us.

There are two types of ROM, and the read/write speeds classify it. The two types we have are the:

SSD is the better and newer option for storing files on the computer(1). External SSDs are available when the laptop ROM is maxed out, or you need another file saving option. Although SSD is costlier than HDD and has a lower storage capacity, they are proven to be more efficient and faster.

Unlike HDD, SSD can easily read/write data because it employs the use of a chip. SSDs can reach up to 550MBps read speed, and 520MBps write speed. That is way better for a video editor that needs to read and then render large files. In addition, SSDs last longer than HDDs because of their design. No moving parts mean no dislocation of essential components. Also, data can’t be wiped with a magnetic field.

The speed of SSDs can be optimized by the type of processor being used in the computer. For External SSDs, rates are determined by the bus type being used. We have the more common SATA SSD, which is not as fast as the PCIe SSD (A.k.a. Non-Volatile Memory Express – NVMe), which can transfer data at a whopping rate of 800MBps. Note that NVMe SSD is costlier than SATA SSD.

The HDD is the traditional form of storing files on the computer. There are also external HDDs that can be attached through USB Type-A ports. HDDs are leading the way in terms of capacity, i.e.; they have a higher ability to store files and, in essence, a better cost/storage space ratio. HDDs are essentially built with mechanical parts.

HDD mechanical parts imply that there has to be movement before the read and write functions can occur, and that is where the fault lies. As a result, the time taken for the data to be read from (or written to) the HDD is less than the time taken for the SSD. The best HDDs hit around 150MBps for read/write functions. Also, because it has moving parts, HDDs don’t last very long. Also, data can easily be wiped out if the panel interacts with a magnetic field.

For video editors, the speed of the SSD matters a lot. The goal is to be able to move large files within the shortest time frame possible. Unfortunately, the SSD can only make so much contribution to the read/write speeds of data. Therefore, an integral part is the type of interface the external SSD and the computer is using.

Your computer side interface must take priority when opting for an external SSD.

Video editors need all the available memory to get for the smooth reading and rendering of video files. However, the computer may not have the desired storage capacity, and upgrading the motherboard might not be within the budget. So, before opting for the best SSD for video editing, what are things to look out for?

Things To Look For In An External SSD

There are things to look for when choosing the best external SSD for video editing. Some of them are:

SSDs are generally more durable than HDDs, but there are still levels to how rugged an SSD is. Modern SSDs are getting smaller in size by the day, and moving them around should not be a problem. In addition, some SSD designs have military-grade shockproof and dust protection.

The benefits of the SSD should not surpass the cost of acquiring it, and that’s why we have the cost/capacity. Due to various reasons, SSDs with the same capacity cost differently. You have to calculate the value you will be getting for the price to be incurred to know the best option.

SSDs are being made to be pocket-sized. While this is good for mobility, it can be a disadvantage. Losing something light won’t be noticed as much as losing one that is a bit handy—losing an SSD, especially one with edited footage because of its lightweight, is not good at all.

F. A. Q
Which SSD capacity has the best value per gigabyte?

The answer is 2TB. Although SSD prices are falling, the 4TB capacity is still scarce and hence costlier, while the 500GB and 1TB just don’t seem to have enough space for video editors.

Which SSD is best for 8K video editing?

Lacie Rugged SSD pro is the best choice because it provides high speed with its Thunderbolt 3 interface, which is necessary for rendering high-resolution videos.

Can I use my external SSD for backup?

Yes. But I don’t advise it because you won’t get value for your money using your external SSD as a backup. Instead, use an HDD with high capacity and SSD for the main business.

Your choice of the best SSD for video editing should be based on performance, computer side interface, and durability. The Lacie Rugged SSD pro comes out on top with these three criteria and is why I recommend it the most to people.

What are your experiences with external SSDs for video editing? Do you have a favorite external SSD that is not on this list? Please feel free to share with us in the comments.