Vlogging offers the most accessible way for content creators to connect with their audience on social media platforms. However, some creatives struggle with keeping and growing their viewer base due to crappy video quality. Therefore, it’s probably time to invest in the best vlogging accessories to create content that will catch your audience’s eyes and make them return for more. Hence, the need for a vlogging accessory such as a kick-ass Sony camera with high resolution, beautiful bokeh, and solid sound input.

This article will review the best Sony cameras for vlogging in 2022. Plus, a comprehensive guide on the factors to consider when choosing a Sony camera for vlogging.

Our Review of the 5 Best-rated Sony Cameras for Vlogging

Coming first on our list of the best Sony cameras for vlogging is Sony ZV-E10. The model is designed with a range of E-mounts that creatives can explore to tell their story differently.

With a megapixel of 24.2, the Sony ZV-E10 image sensor is significantly better than the regular 1″ sensor type of other Sony compact cameras. As a result, it delivers finely detailed images with top-notch quality. In addition, the model shoots videos in superb 4k at 30p while oversampling from 6k to further improve image quality and detailing.

The autofocus system of the ZV-E10 uses a unique focusing technology called the product showcase focusing. In this mode, vloggers can hold up an object, which could be a makeup brush for a tutorial for the viewers to see clearly, and it effortlessly switches to the presenter when needed.

The LCD screen is flippable and can open up and down for selfie vlogging. Also, the LCD screen does not obstruct the use of an external microphone for improved audio quality. 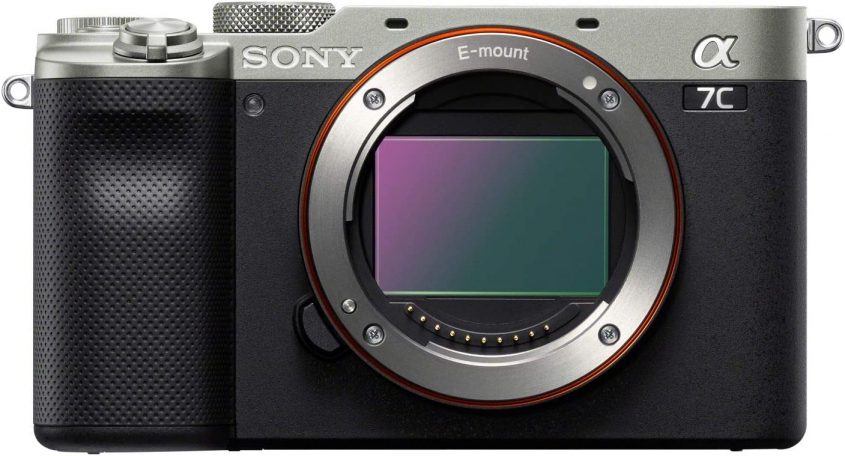 Here’s a camera to beat for Pros looking to up their vlogging game. The Sony Alpha 7C is an exceptionally lightweight mirrorless camera and can be used to vlog on the go. In addition, it’s ideal for hand-held video recording. And if you are worried about shakes and vibrations, the image stabilization up to 5 axis does a great job of correcting unwanted blurs.

The Sony a7C model captures 4k videos at 30p and Full HD at 120p while oversampling at 6k. This feature will deliver nothing but super clear and high-end image quality. Furthermore, the AF performance is not only fast, but it also offers up to 7 speeds option that pro-vloggers can explore to get the best out of the camera.

Creatives can open the screen to the side for filming in the best position possible. In addition, thanks to the 24MP camera sensor that is back-lit and a high ISO of 204,800, the model can be used to vlog in low-light conditions. 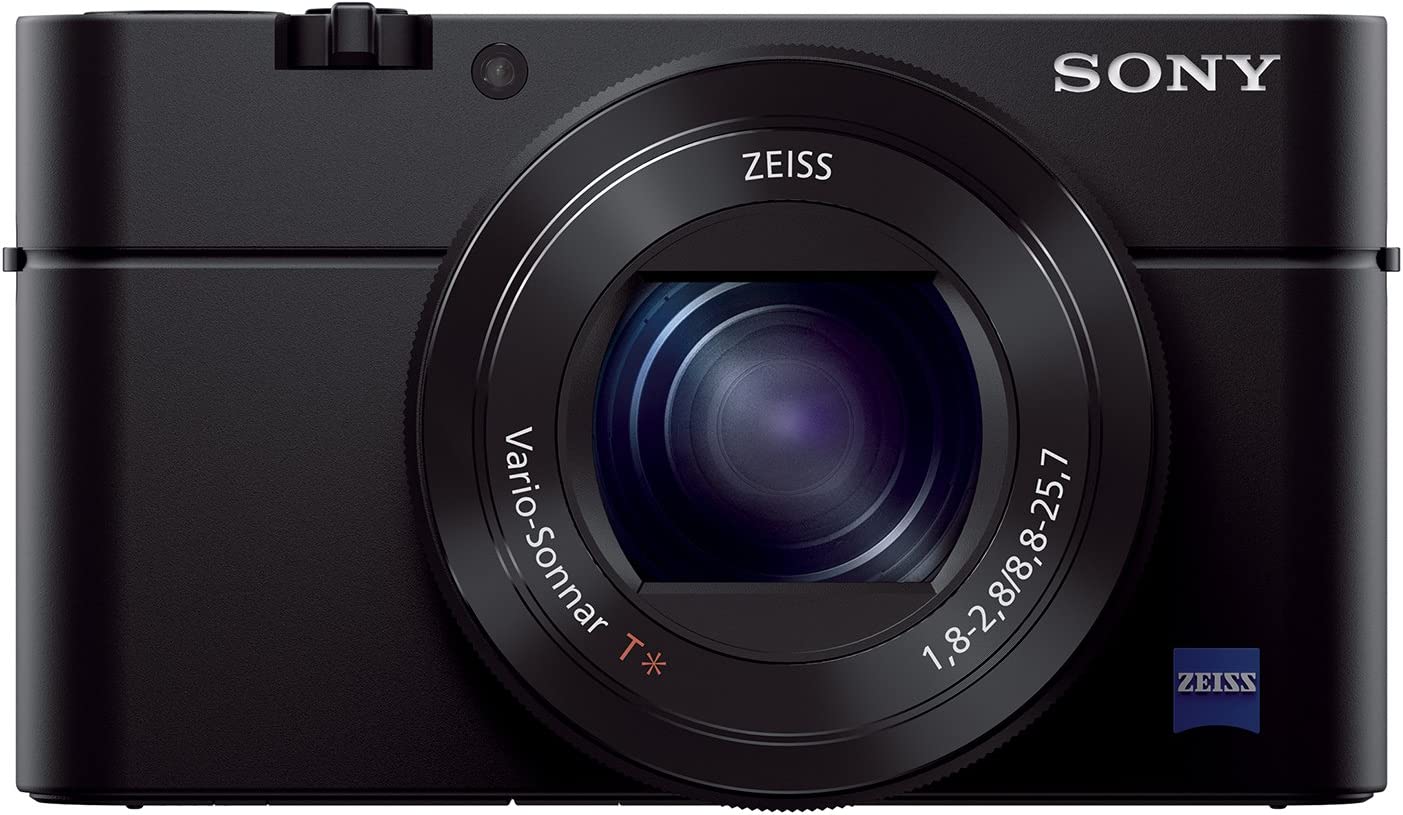 For vlogging on a budget, here’s an affordable Sony camera for vloggers on a budget. It has a fast AF system, tiltable screen, and high-resolution video, which are desirable by vloggers. And for this reason, the camera qualified to be on our list of the best Sony cameras for vlogging.

The first enticing feature of this model is the impressive AF technology, which combines with real-time autofocus to give you a swell time vlogging without worrying if the subject is in focus. Not only that, the 24mm-70mm lens comes with fantastic flexibility, which means you can shoot videos at wide or close-up angles without any form of distortion in the image quality.

The camera is designed with a BIONZ X processor, which processes images fast and accurately while recording HD videos with stunning image quality. It also uses a defocusing system to create a soft, dreamy background for the subject, giving your vlog that cinematic touch. Additionally, the 180°-tiltable screen allows for easy front-facing vlogging. 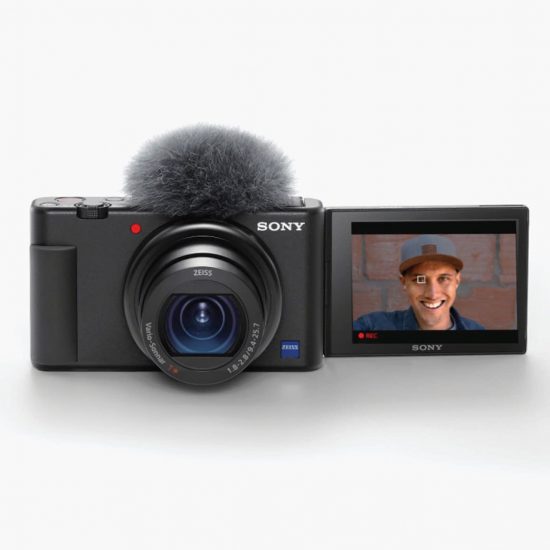 The ZV-1 is a popular vlogging camera and one of the best Sony cameras for video. The Sony ZV-1 has functions that are easy to access. For example, the “start video record” and “defocus background switch” buttons on the camera’s body, which beginners can quickly push to start vlogging and blur the background beautifully.

An excellent AF system combined with real-time tracking covers close details. Also, with a CMOS sensor type and wide aperture lens f1.8-f2.8, this camera will add beautiful and dreamy bokeh to the image captured. Not only that, the wide lens aperture makes it suitable for shooting in foggy and dim conditions.

The model’s LCD screen is a touchscreen for easy access to the camera’s function; and flippable for easy access. Additionally, Sony included an image stabilization system in the camera which means you can vlog while moving around, and any shake-related blur is corrected.

This camera offers top audio quality using the in-built forward directional microphone. Plus, it comes with a windscreen to reduce wind interference. 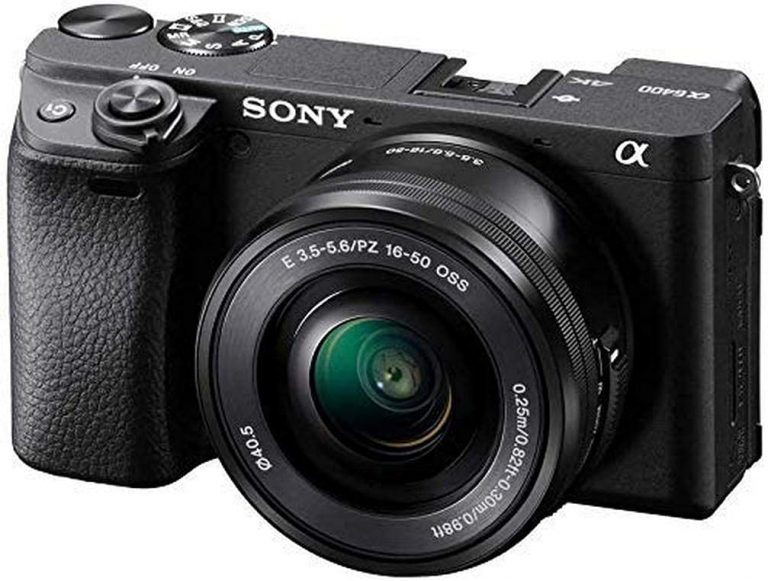 Do you enjoy chronicling beautiful memories as you go on that dream vacation or tour places with unique landmarks and artifacts? If the answer is yes, then you should check this camera out. The Sony a6400 was designed in the best interest of travel vloggers. It is super light in weight and won’t be burdensome luggage to carry for a trip.

The camera has one of the fastest autofocus systems that accurately bring fast-moving subjects to focus. This means you can capture memories as you travel to your destination. Also, the ISO at 32,000 brings digital noise to the barest minimum during dim light situations without image fringing or missing the essential details.

Reviewing the Sony a6400 will be incomplete without mentioning the 16-50mm lens featured on the camera. With this lens type, vlogs are as realistic as possible. The AF-C mode also effectively tracks the subject’s face and does not go out of focus even as you move, or the subject slightly changes position.

Furthermore, this model allows content creators to record superb 4k video resolution up to 30p. Not only that, at 120fps, you can emphasize certain parts of the footage in slow-mo as you vlog.

How to choose the best Sony camera for vlogging

To choose the best Sony camera for vlogging, you must be familiar with the camera features needed to shoot a quality vlog, including the sensor type, autofocus system, and image stabilization mechanism. Therefore, working knowledge of the features of a Sony camera is a must to get the best value for your investment.

You should understand how the camera sensor works; then aim for an outstanding autofocus system, high video resolution, quality audio input, lasting battery life, a sturdy camera body build, and a foldable display that makes self-recording much easier.

Here are some of the talking factors to consider when choosing the best Sony camera for vlogging in 2022:

The best Sony cameras for vlogging mostly have APS-C sensors. This sensor type is compact and capable of cropping lenses with an excellent zoom option. (1) Conversely, full-frame sensors are not entirely ruled out. The Sony a7C has the lightest full frame and was designed to help vloggers produce videos with excellent resolution.

Using a manual focus for vlogging will make the process tiring and leave creators with lots of edits to make after recording. That is why you should use a camera with an autofocus system for vlogging. Sony cameras are built with fast and accurate autofocus.

In addition to excellent autofocus, they also use eye detection techs to track humans, animals, and birds. The showcase product mode also helps vloggers focus on objects held up for emphasis.

The camera’s video resolution determines how clear and detailed a vlog will be. In addition, the high resolution allows for zooming options that do not result in distortion. Hence, a camera with high resolution will produce a high image quality and vice versa. The best Sony cameras for vlogging should be able to record 4k video at 30p or 60p.

Here’s a factor to keep in mind for vloggers who shoot hand-held or walk around. When you vlog and walk, your video is prone to unwanted blurs caused by an unsteady camera. Hence, the need for a camera with good built-in stabilization at the least.

Sony vlogging cameras are designed with in-body image stabilization up to 5-axis, which corrects camera shakiness in the video footage. Some Sony models also use electronic stabilization to compensate for vibrations and unnecessary blurriness.

Compact Sony cameras without in-built image stabilization are not completely off-limits for vlogging. However, you should use gimbals or tripods to keep them steady as you vlog on the go.

Excellent audio quality is as important as image quality in vlogging because sound allows your audience to relate better to the visuals you provide. Hence, consider a Sony camera with an in-built microphone for top-notch voice recording. Also, for better audio quality, some Sony models are designed with a windscreen to block wind interference during vlogging in windy conditions.

You can also go for Sony cameras that offer an external microphone jack for improved audio quality in your vlogs.

Nothing is more frustrating than the battery dying out during vlogging. Especially for unscripted vlogs where getting back the flow may be impossible. To avoid this unfavorable circumstance, go for Sony cameras that can record video for 2-3hours before needing a recharge. Investing in cameras with interchangeable batteries will also come in handy during outdoor vlogging, where a power source is inaccessible.

The design of a camera is crucial when choosing one for vlogging. Vloggers sometimes vlog on the go. Therefore, lightweight cameras that won’t strain the hand or that can easily fit into the pocket are the best choice. (2) Fortunately, Sony cameras like the Sony ZV series and a7C are compact and suitable for vlogging.

Chances are high that vloggers may be required to film their faces during vlogging. Therefore, you should choose Sony cameras that flip out to the side or tilt to a particular angle for smooth front-facing vlogging. However, a Sony camera that opens up may not be the ideal choice if you will be using an external microphone for vlogging.

Does a high megapixel mean a better vlogging camera?

What is the best Sony vlogging camera for YouTube videos?

The Sony ZV-series cameras are the best vlogging cameras for YouTubers. They are designed with a flippable LCD screen for self-recording, have an excellent built-in microphone, and a compact body necessary for filming on the go.

Choosing the best Sony camera for vlogging is influenced by factors like compactness or video recording capability. First, however, you’d want to make sure whatever camera you decide upon must suit your personality and style.

The cameras discussed in this piece have outstanding features that give a fantastic vlogging experience; however, our overall best camera for vlogging is the Sony ZV-E10. The camera is designed with an image sensor that performs three times better than other sensor types, which produces impressive image quality. In addition, the LCD flips to the side for front-facing vlogging and fast autofocusing, bringing the subject to focus without hassle.

Which Sony camera do you use for vlogging? Let us know in the comment section the features that stood out for you.