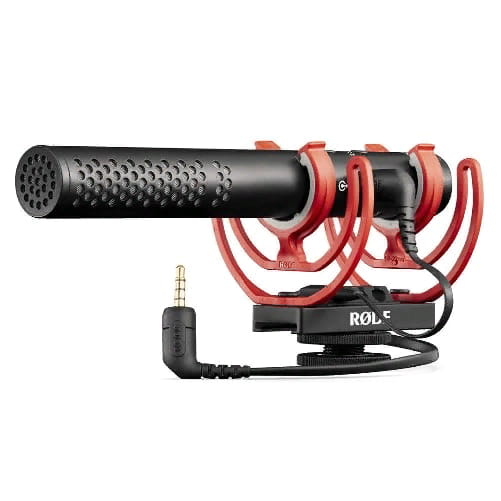 Rode has been producing quality shotgun mics for DSLR cameras for a while and this product is an absolute upgrade on their shotgun mics. The Rode videomic NTG has circular cutouts in the barrel, an innovative feature for rejecting side and rear noises. This feature makes it a perfect shotgun mic for video shoots of both long and short distances.

This mic has a  flat frequency response ranging from 20Hz to 20KHz. In addition, the Rode NTG5 uses a supercardioid polar pattern which is not uncommon for shotgun mics of this calibre but still has an impressive signal to noise ratio. As a video producer, the high pass filter (-20dB) and high frequency boost can come in really handy when you need to make adjustments during production.

This mic’s versatility makes it suitable for uses other than using it with a camera whereby the auto-detecting 3.5mm audio jack comes into action. The Rode VideoMic NTG is a fully-featured USB Type-C microphone that you can use for recording from computers, tabs, e.t.c. This shotgun mic also comes with an in-built lithium battery that will last for at least 30 hours.

If you are looking for good quality with a very affordable price tag, then you should focus on this part of the review because this is one of the best cheap shotgun mics for DSLR you will find available. What makes it deserving of this list, though? Let’s find out.

For a cheap shotgun mic, this product has a 50hz to 16KHz frequency response range and sensitivity of -32dB. In addition, the unidirectional polar pattern present in this shotgun mic combined with a heart-shaped single-point mic pickup effectively reduces background or ambient noise.

A particular feature that stands out in this shotgun mic out is its low-frequency attenuation. This mic attenuates frequencies of 60Hz/10dB, which adjusts the bass in the sound to the right amount. Unfortunately, the other side of this feature is that this shotgun mic lacks in the high-frequency sound department. However, like the Rode NTG, it also has a low-frequency filter at 200Hz, and you can also boost the audio sensitivity to an additional +10dB.

This mic runs on a 1.5V AA battery. Also, the Takstar SGC-598 comes with an anti-vibration feature that helps keep it steady and helps reduce the sound of the mechanical whirring of the camera to a minimum. Without a doubt, this is the best budget shotgun for DSLR you will find. 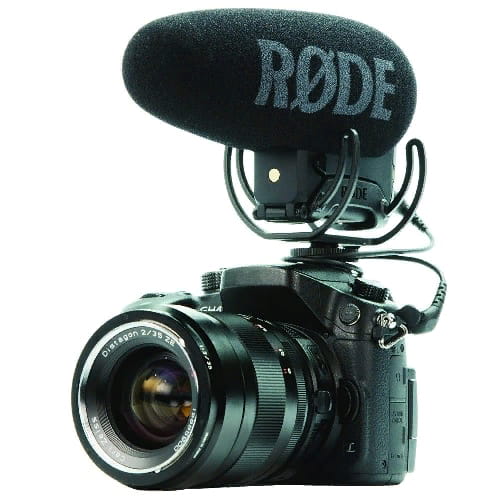 Another Rode product makes it one of the best shotgun mic for DSLR cameras, albeit as a premium choice. The Rode Videomic pro plus is the latest in this series of RODE shotgun microphones. Of the plethora of features that this shotgun mic possesses is the automatic power function that makes the mic come on or go off with the powering on or off the camera.

Of course, it features the Rycote Lyre suspension system that Rode shotgun mic products have come to be known for. This mic has a frequency response range of 20 Hz to 200 kHz. In addition, this shotgun mic has a 2-stage high pass filter to reduce the lower frequencies and 3-stage gain control to improve sound signals. To top it off, this mic has an impedance rating of 200 ohms.

The Rode Videomic Pro Plus runs on a rechargeable 9V battery that can power the mic for about 70 hours when fully charged. Other options for powering this mic are with USB or with two pieces of AA batteries. 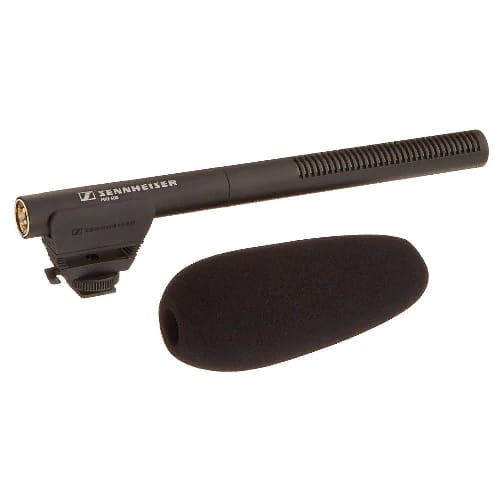 While video production can not be limited to a particular genre, some equipment is better suited for specific occasions. One such piece of equipment is the Sennheiser MKE 600 shotgun mic that is ideally suited for documentaries.

This narrow shotgun mic is encased in a metal housing and comes with a fur windshield and a shock mount; all targeted to give the best audio experience. The sound quality is not sacrificed for the rugged outer housing, though, as this mic still manages to produce the cleanest sound. In addition, the Sennheiser MKE 600 captures sound in a single direction, and it effectively cancels noise coming from the side and the rear.

The Sennheiser MKE 600 has a switch that can help you filter the lowest frequency noises like the minute sounds that come from you handling the mic. Like the Rode Videomic Pro Plus, you get the option of powering this mic with AA batteries or with a cord.

This mic was designed so that it only needs a cord to power it as it draws its power from the camera. Just like the Sennheiser MKE 600, it has an entire metal body. The specifications on this mic include a frequency range from 40Hz to 20KHz. It also has the Rycote lyre suspension system for stability when shooting videos.

You can use this shotgun mic with either a camera, a phone, or any recording gadget with a 3.5mm cable port. Part of this mic’s features is a furry windscreen that helps to reduce ambient noise. Although this mic does not have the frequency filters common to the other Rode mics on this list, it is still effective enough to work for beginners and semi-professionals.

The versatility and ease of use of shotgun mics have made them increasingly popular among aspiring and professional video makers. You just need to point in the direction of the sound.

How to Pick the Best Shotgun Mics for DSLR Cameras

Shotgun microphones are pretty common with video producers, and they have proven to be very effective in capturing and enhancing audio. What makes them different from other mics, though?

Also, what are the things to be considered before choosing the best shotgun mic for DSLR in the market.? These are questions that we will answer in this section of the article.

First of all, what are shotgun mics, and how do they work?

What is a Shotgun Microphone?

This feature helps it concentrate on the audio source while ignoring other sounds coming from the rear or the sides. The unidirectionality of shotgun mics is also what makes them so suitable for recording with a DSLR.

Pick up Patterns in Shotgun microphones.

There are three variations of the cardioid polar patterns that shotgun mic manufacturers make their shotguns in, and they are:

Other Things to Consider When Picking the Best Shotgun for DSLR

Microphone impedance is one of the more technical reasons for picking a shotgun mic for a DSLR. It may seem unnecessary, but professionals know the value of this feature. In layman’s terms, impedance is something that blocks the smooth flow. Our voices or sounds we make into the microphone come in the form of AC signals.

Due to some reasons, there is an impedance in the voltage, which is the output. Since impedance is necessary for electrical circuits to function normally, it’s only logical to look for equipment with low impedance ratings.

In conclusion, you should check any shotgun mic you are interested in for the impedance rating. The vital thing to note is that the lower the ratings, the better it is for the output.

If you have been shopping for microphones, you should have come across descriptions of some microphone features such as sensitivity(1). It is usually denoted with dB. As you have probably guessed, the sensitivity of a microphone determines how well a microphone can augment or reproduce a sound in the output.

The sensitivity of a mic is the ratio of the input pressure to the output voltage. In video production, high sensitivity in a microphone does not mean it is better and vice versa. However, you should be able to choose a shotgun mic with enough sensitivity to suit your projects.

You need to know the sensitivity rating of any mic you have or want because that will dictate how and where you can use the mic. For example, you wouldn’t want to use a highly sensitive microphone in a closed quarter with a sound source, and the results will be wrong. High-end shotgun mics sometimes have filters that you can use to increase or decrease the mic’s sensitivity.

This feature of the microphone is usually described in ranges, for example, from 20Hz to 20KHz. The frequency response is the range of frequencies (tone or sound) that a mic can reproduce well, i.e., A shotgun mic with a frequency response of 50Hz to 18KHz is expected to produce any sound in this range well. The frequencies are responsible for the low, mid, and high.

F. A. Q
What's the difference between a shotgun mic and a lavalier?

The fundamental difference between a shotgun microphone and a lavalier mic is their pickup pattern. Shotgun mics adopt the cardioid polar pattern, while lavaliers adopt the omnidirectional polar pattern. The use of one over the other mainly depends on the scenario that a mic is needed for.

How do polar patterns affect my choice of the shotgun mic?

A polar pattern is an important feature to consider when choosing a shotgun mic because it will dictate how well the mic will capture the sound in a particular direction.

Shotgun mics have gained notoriety due to their ability to focus on the desired audio amid other sounds. This unidirectionality makes it a good complement for DSLR cameras and video producers in general. Picking the best shotgun mics for DSLR available in the market is now easier as you can focus on the significant specifications you need from a shotgun mic.

Personally, the Rode Videomic NTG will be my go-to shotgun mic as it stands out from the rest in overall completeness and features. It checks all the boxes, including durability, frequency filters, cancellation of ambient noise, adaptability to different recording gadgets e.t.c. At the same time, a close second will be the Rode Videomic pro plus.