The Canon EOS R5 camera is a mirrorless camera that can work in different capacities for professionals and hobbyists. However, this camera’s versatility is still down to some things, with the lens being the most important part. Now, choosing a Canon EOS R5 lens can be overwhelming because the options are many.  No worries, though, as we have gone through the stress of sorting and picking the best lenses for Canon R5 for you. Below, we have our choices of the top lenses that can get you the best of the Canon EOS R5. Happy reading.

Our Review of the Best Lenses for Canon R5 in 2022 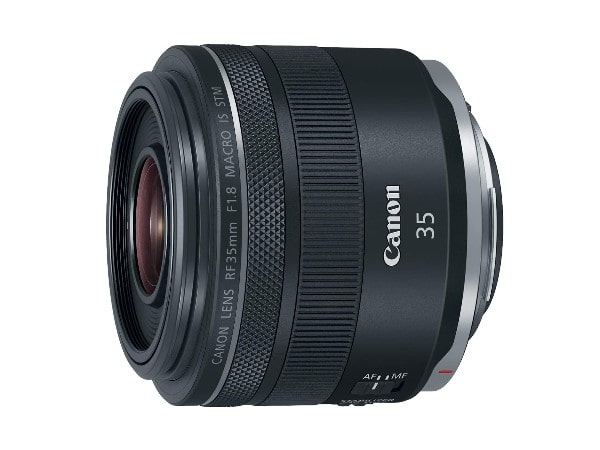 Picking the best lenses for Canon R5 can be tricky as many lenses can fit this category. Still, if any lens can claim the overall best, this lens can. The Canon RF 35mm f/1.8 IS STM is arguably the best lens for this camera because of the value to cost ratio.

This lens is a wide-angle lens perfect for shooting videos and photos. Low light photography is achievable thanks to the wide aperture and five stops of image stabilization. In addition, this lens can double as a macro lens with a magnification of 0.5x, and you can get as close as 17cm to the subject while still achieving focus.

The Stepping motor focusing mechanism used in this lens makes the focusing quite silent and fast. The wide aperture helps this lens produce one of the best ranges of focus depth, including the awesome bokeh effect this lens has. You also get a control ring for settings changes with this lens.

The solid build of this lens, alongside the lightweight, makes it the perfect gear for both hobbyists and professionals. It is also compatible with Canon lens ring lights which are good for close-ups in the studio or on set. 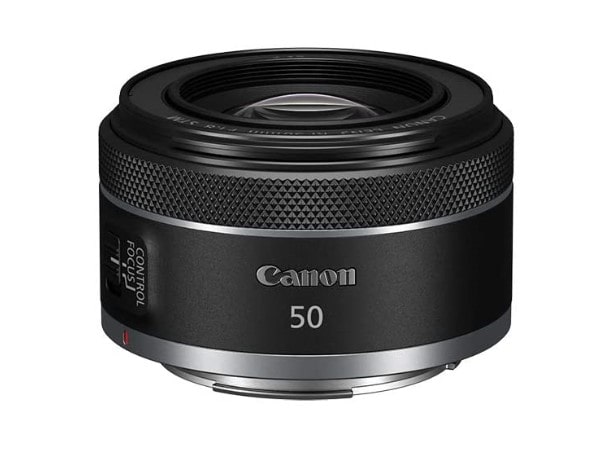 Looking for the best budget Canon EOS R5 lens option, then you can rarely do better than this lens. A prime lens like its counterpart above but with a 50mm focal length instead and the absence of an image stabilization feature can easily be remedied with a tripod stand.

As prime lenses are absolute delights with picture quality, you can be assured of the same with this lens. This lens is very versatile and can be used in several different ways depending on the creativity of the photographer or videographer.

With a wide aperture of f/1.8, users are assured of quality shots even in low-light settings. Also, the STM focusing mechanism results in a silent and fast focus. This, coupled with the minimum focusing distance of just 30cm, gives users a good advantage, especially when shooting videos.

Like the RF 35mm mentioned above, this lens is also very light, weighing just 160 grams. Although this lens has impressive quality, the price point makes it affordable, which is good for beginners and hobbyists to sharpen their skills. 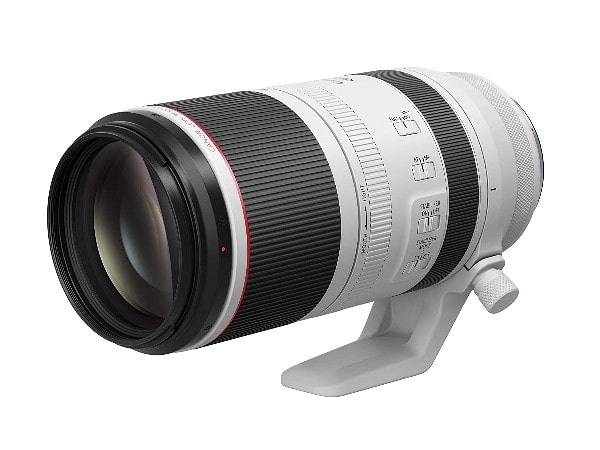 With many individuals interested in wildlife shoots, here is a perfect lens to capture distant subjects, making it ideal for sports videography. With a focal length between 100mm and 500mm, you can be assured that a lot of distance can be covered by this lens.

This telephoto lens has a good aperture opening that changes between f/4.5 and f/7.1 depending on the zoom range. The telephoto capabilities help users single their subject out. While it has a 5-stop image stabilization feature, the IS has been designed to work in three modes: pans and exposure.

This Canon R6 compatible lens has a minimum focusing distance of just 90cm. It also uses the duo of a nano ultrasonic motor (USM) alongside an STM focusing mechanism for fast and silent focusing, with the option of full manual override.  In addition, the lens comes with a control ring for easy settings adjustment.

Compared to the two previous products on this list, this lens is significantly heavier. Still, it’s also sturdier and has good weather and dust-resistant coatings, making it perfect for the outdoors. This focal length range can also be extended when combined with the RF 1.4x and RF 2x extenders in the 300mm to 500mm range. 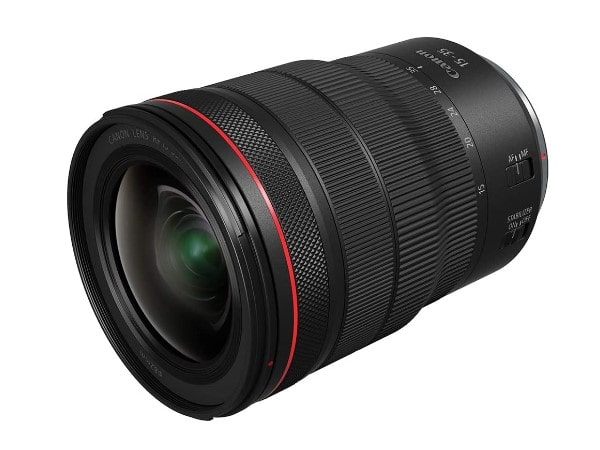 Even though all the lenses in this article are suitable for shooting videos, none is better than this lens in this aspect. Firstly, the aperture range of 15-35mm gives it a huge advantage as lenses with wide-angle characteristics are more appreciated for making videos. There is more.

This lens has a wide aperture of f/2.8, which is not as large as the prime lenses mentioned previously but is as highly effective, even in low light conditions. The minimum focusing distance allows users to get up close, as close as 28cm, to their subjects while maintaining good focus.

The focus is quite silent and fast. Thanks to the nano USM and STM mechanism, the focus is quite quiet and fast. There is also a full-time manual override for the focus. The aperture makes different focus depths achievable, including an incredible bokeh effect. The configurable control ring on this lens makes adjustments easy.

This lens has an awesome build with dust and weather-resistant protection and good handling while being lightweight for a zoom lens. The magnification of 0.21x gives users some macro abilities, which are still quite okay for videography. 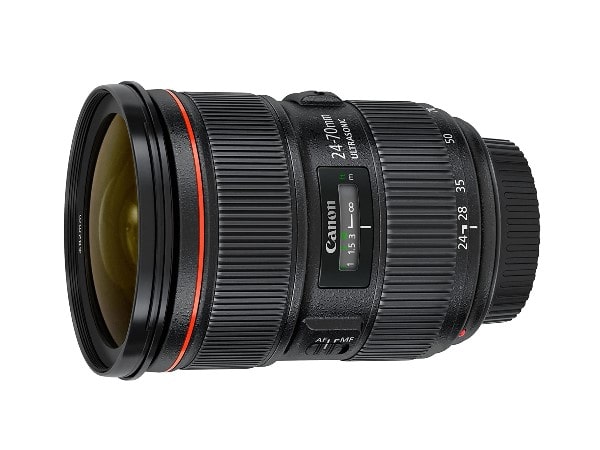 If you wonder if canon DSLR lenses are compatible with mirrorless cameras, then Yes, they are. However, this can only be achieved through lens mount adapters. Using this EF lens with the Canon R5 camera is a good example of combining the Canon R5 with EF lenses.

This EF lens is one of the best lenses for EF and RF mounts. It is a zoom lens with a bright aperture of f/2.8, perfect for all kinds of shooting scenarios. The 24-70mm zoom range gives users a fantastic field of view range, making it quite good for different types of videography.

With a minimum focusing distance of just 38cm, users can get good close-ups of the subject while recording. This lens uses an ultrasonic motor that is fast and silent enough to produce good videos.

A camera is only as powerful as the lens attached to it. Hence, it is important to clearly define the best possible lens for a particular kind of photography or videography.

This lens’ build is optimized for handheld photography and videography. Thanks to the weather and dust-resistant coatings, it is designed to work outdoors. The zoom lock on this lens also makes working with it easier by locking in the zoom at desired points and when it is fully retracted.

How to Choose A Lens for Canon EOS R5

The Canon EOS R5 is a mirrorless camera known for its versatility. It has a 45MP sensor, image stabilization, and can record videos in 8K. Maximizing the potential is another.

This is the first question one needs to ask oneself before venturing into lens acquisition. While we have different kinds of specific videography and photography, many people do a bit of this and that. Suppose you are unsure of the sort of photography you want to engage in or are more of a general photographer. Standard prime lenses or zoom lenses within the wide-angle to mild telephoto focal lengths are advised.

For others with specific videography fields, then specific lenses are advised. For example, super-telephoto zoom lenses are better for sports videography and wildlife capture, while wide-angle to standard prime lenses are good for making movies. You can always check for what the professionals in your field of interest look for in lenses.

Canon initially designed the RF lens to be compatible with their mirrorless cameras. However, adapters(1) were introduced to help use EF lenses (meant for DSLR cameras) with mirrorless cameras, so we sometimes see the Canon R5 with EF lenses.

It is advised to go for RF lenses since they were originally meant for the Canon EOS R5, while EF lenses are also a close second choice. Third-party lenses are also good choices, but it’s important to check for compatibility with the Canon R5 adapter.

Another thing to note is that zoom lenses generally don’t have their apertures as wide as prime lenses, which is basically due to the design of both lenses.

Focusing is very important to a lens. How fast can a lens focus? What is the minimum focusing distance a lens can focus from to infinity? Is the focusing mechanism silent enough for video recording? These are important questions that should be answered before making a Canon EOS R5 lens choice. The answers can be the difference between using a lens for an interview and using it for making music videos.

The optical elements that make up a lens are responsible for how the lens functions. Of the many details of the lens’ optical elements, the most important one to look out for is how the elements were constructed to mitigate against optical errors.

The most common errors with lenses include chromatic aberrations, distortions, ghosting e.t.c.  It is important to check the measure the lens manufacturers have taken against these errors and how well they have managed to reduce them. Most of the time, the steps taken to reduce the optical errors are part of the features of the lens.

Image stabilization is not regarded as a primary lens criterion mainly because most lenses made in recent times have the IS feature. A lack of IS in a lens can easily be remedied with the camera’s IS or a tripod.

However, image stabilization has come in handy when shooting low lights shots, especially for lenses that do not have wide apertures. So, lenses with IS are a plus when acquiring a lens.

This is usually an underrated lens criterion but is equally important. Lenses can be expensive, especially the premium ones. The least effort one can put is to check lens reviews for handling, sturdiness, and build of the lens. Some lenses come with anti-scratch or weather and dust resistant coatings, while others are made of durable plastics or metals.

The weight of a lens is also important because of mobility and handling. A light lens is always a plus, especially for vloggers and individuals who shoot handheld videos.

Generally, premium lenses are more costly than regular lenses, and the difference is always clear for the most part. Despite this, there are competitions for different lenses at a similar or lesser price.

Also, recently produced lenses tend to be more expensive than the older ones, although it is not a given that the lens will be better in performance. All in all, lenses should be well researched to get the right value for the money expended on acquiring them.

F. A. Q
Which lens is the best for vlogging?

Prime lenses are good for vlogging mainly because they produce a nice image quality and are usually light and portable for carrying.

Can I use EF lenses with the Canon R5?

Yes. EF lenses can be used with the Canon R5 with a lens mount adapter due to the difference in mount.

There, you have it. A review of our best lenses for Canon R5. While you are free to choose lenses from our list, you can also pick a different lens using our tips on selecting the best lens for the Canon EOS R5.

Picking one from the lenses reviewed above can be tricky, but if this was the case, then the Canon RF 35mm f/1.8 IS STM is a great lens choice. Mainly because of the features and the price point relative to the quality of image it delivers. However, other lenses on this list are great choices too.

What kind of videography do you engage in? What is your Canon R5 lens preference? Please share your thoughts with us in the comments.