Using a tripod head for video is necessary for balance, and it is also less stressful than using your hands. However, the importance of tripod head design comes into play when it’s time to pan or tilt your camera. Luckily, fluid head tripods have risen to the task of producing smooth movement when angling your camera. The awesome design of the fluid head has prompted me to make a list of the best fluid head tripods for video available. Happy reading.

Our Review of the Best Fluid Head Tripod for Video 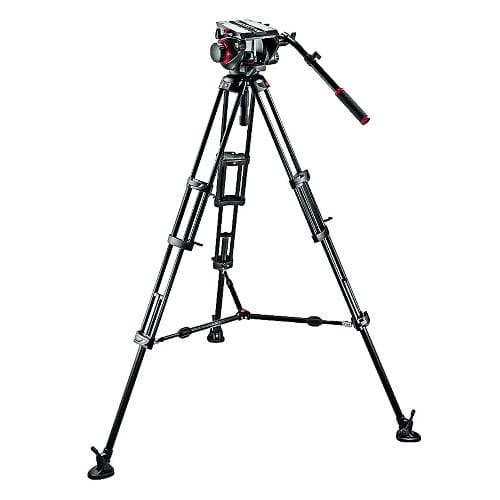 Only a few manufacturers can boast of matching the tripod heads for a video that Manfrotto makes. Unsurprisingly, this fluid head tripod is another thoughtfully designed fluid head tripod that has made many videographers happy. I guess you are wondering, “what makes it so special?”, well, the answers are next.

With an impressive safety payload of 13.5kg, you can be sure that this tripod can support a wide range of camera weights you can place on it. The tripod in itself weighs around 7kg. When fully extended, this tripod reaches a height of 66.34 inches and can also be used at a minimum height of 18.7 inches. The tripod legs have two sections.

The pan angle on this tripod is 360 degrees, while the front tilt can operate at -70 and +90 degrees. This may come as a surprise, but it uses a lithium battery to power some of the automatic functions the users enjoy. 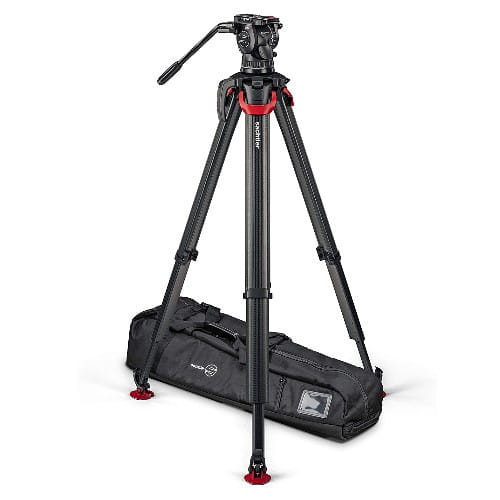 This fluid head tripod is one of the big guns in the industry, and it is used mainly by professionals who demand value for the money spent. However, Sachtler is famous for making high-end tripods for video, and unlike the best cheap fluid head tripod discussed above, this tripod attracts way more price.

Like the Manfrotto 509HD tripod, it has an illuminated level bubble that comes on when you have reached a balance. In addition, this tripod has a patented tech that helps you achieve shallow shots. Also, mounting the camera is extremely easy because of the sideload mechanism it adopts and the 120mm sliding range. 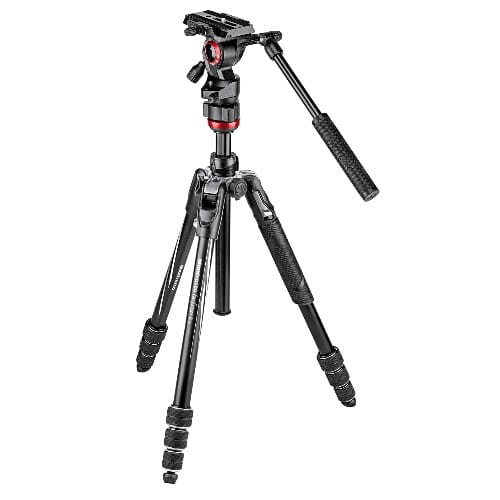 Manfrotto retakes center stage with this lightweight fluid head tripod. For individuals interested in fluid head tripods to use on the go, I can confidently tell you it rarely gets better than this. It has qualities you can want in a travel tripod and then some.

This fluid head tripod has a total weight of just 1.64kg and can support cameras up to 4kg. It is mainly recommended to be used with camcorders, DSLR cameras, and cameras under the 4kg weight limit. Although it has a maximum height of just 150cm, it is also highly portable when folded (it goes back to 40cm when packed).

The tripod spider, the Manfrotto MVKBFRT features, is a unique system of keeping the camera leveled and balanced in all types of terrain. In addition, it has the M-lock for securing the tripod when extended and an angle selector that helps you choose which of three angles you want to use for the individual legs.

A bubble level is provided with this tripod so you can monitor balance. Instead of the advanced counterbalance system its counterpart on this list uses, this tripod adopts an individual screw system to adjust the tilt and pan of the plate. The pan angle is 360 degrees, while the tilt angle ranges from -90 degrees to 65 degrees.

I mentioned earlier about Magnus being a company that dishes out quality tripods at affordable prices – at least for most people. The Magnus VT 4000 is another quality fluid head tripod that comes with a price tag under 200.

The Magnus VT has a total weight of 4.8kg and has a maximum load capacity of 4kg, which points to a fixed counterbalance of 1.5kg and a sturdy build. The counterbalance provides for smooth movement when tilting between the range of 90 degrees to -60 degrees. Furthermore, this fluid head tripod can extend up to 59 inches and can also be worked at 27.6 inches conveniently.

This tripod features a leveling bubble that helps indicate when a balance has been reached between the tripod head and the camera. It also features separate pan and tilts locks for adjusting the drag when panning or tilting. A quick-release plate that uses a 0.25-inch screw accompanied with a slide range of 20mm to -25mm ensures you get one of the most effortless fits when mounting your camera. 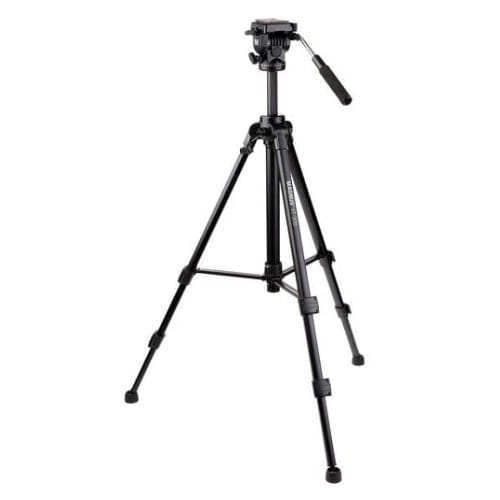 Magnus is another tripod maker that gives us pretty affordable quality tripods. The Magnus VT 300 is our best budget fluid head tripod for video, and with good reason.

This incredibly lightweight – weighing just 2.7kg – tripod is compatible with camcorders, DSLR cameras and can also have a maximum load capacity of 6.8kg. With that maximum load capacity, this camera can work with a good range of weights of cameras. The tripod stands have three sections held in place with firm flip-lock leg locks and a maximum height of 64.3 inches.

The fluid mechanism in this tripod allows for a smooth 360 degrees pan and vertical tilts without the earthquake effect. There are independent locks that help keep the plate in place when taking stills. Like the very advanced Manfrotto 509HD, it has an in-built bubble system that aids in getting the right balance even on rugged terrain.

Another feature worthy of note is the quick-release plate. This plate has a ¼ inch mounting screw, a pin and an anti-skid mounting surface which I find to be a considerate addition. Although this camera does not offer premium functions like the Manfrotto, it provides enough to earn the best budget fluid head tripod tag.

How to Choose the Best Fluid Head Tripod for Video

The fluid head stands out from the different tripod heads that can be used when shooting a video. However, its outstanding performance is nothing other than the feature that it has that helps users complete a pan or tilt without the earthquake effect. So what is an earthquake effect?

An earthquake effect refers to the slight shake that happens when we start or stop panning using a mechanical head tripod like the three-way tripod head. While the earthquake effect may seem like a non-issue to some, it can be a significant difference in videos.

So, what are the things to be considered when looking for the best fluid head tripod for video? Here are some important ones

This feature is probably the single, most important requirement for a fluid head tripod. The reason being that you want your tripod to be firm while tilting. Tilting your camera for a video shot shifts the weight from one part of the tripod to another. Counterbalance is responsible for keeping the balance when the weight shifts from the center of the tripod.

Counterbalancing in fluid head tripods has become better over the years. There are now tripods that give absolute control of the counterbalance system to the user. An example is the Sachtler product discussed earlier. Also, some manufacturers indicate the weight of the counterbalance, especially for fluid heads that can take on massive payloads.

All in all, always check for the counterbalance feature of a fluid head tripod you intend to acquire. Most times, the pricier options give you a better counterbalance than the less pricey ones.

Maximum load capacity is the maximum payload your fluid head tripod can hold before tipping under pressure. It gets tricky, though. Maximum load capacity with respect to the  Center of Gravity (COG) will fluctuate. To explain simply, a tripod with a broad base will have a COG closer to the ground than the same tripod whose legs have been hunched together to give more height. The former is better because it will take more effort to tilt.

In essence, while you keep the maximum load capacity of the tripod you want in mind, always consider the maximum height at which the load can sit comfortably on the mounting plate.

What is a fluid head tripod without its notoriously flawless pan(1) and tilt? Yes, nothing, and that’s why you have to check out the pan and tilt angle ranges. Every fluid head tripod worth its salt provides 360 degrees pan angle while the tilt angle usually varies depending on the product.

The tilt angle is divided into up (positive degree) and down (negative degrees). The tilt angle represents the movement of the fluid head on its axis, albeit vertically. So, the tilt angle range and pan range should be dictated by the projects you need to complete with the tripod. The more the tilting angle, the better it is.

This feature is pretty straightforward. If most of your video projects do not involve moving around, then you can opt for a heavy fluid head tripod setup. On the other hand, if you are a hobbyist or you need your tripod on the go, then you should consider lightweight tripods. There is a catch, though. Heavier fluid head tripods can carry more payloads.

Most importantly, you should look out for the value the fluid head tripod offers against how much it will cost you.

The significant difference between the two types of heads is the smoothness with which they execute the panning and tilting actions. The fluid head is smoother.

What happens if I exceed the Load capacity of my fluid head?

The limit is there to protect the tripod and the gear. You may get away with a couple of extra ounces, but you run the risk of damaging your tripod and the camera.

Now that the best fluid head tripod for video has been discussed, you know why they get all the hype when making videos. In addition to that knowledge are the criteria that should be met when acquiring one.

If I were to pick one then, I would opt for the Manfrotto 509HD. It offers excellent value for the cost and has some pretty smart features: the patented ABR by Manfrotto. That feature gives it an edge over the others. In addition, the fluid head tripods on this list create a good option of features and prices for every individual in the filmmaking business.