Vlogging is one of the easiest and most fun ways to document ideas and details. With the increase in vlogging in recent years, there has also been an increase in demand for cameras capable of documenting these moments. And with Canon being one of the top camera brands, I have compiled a review of the best Canon cameras for vlogging.

In addition to the review, I have added a simple guide on choosing the best Canon camera for vlogging, which should help you make better buying decisions. Happy reading.

Our Review of the 5 Best Canon Cameras for Vlogging 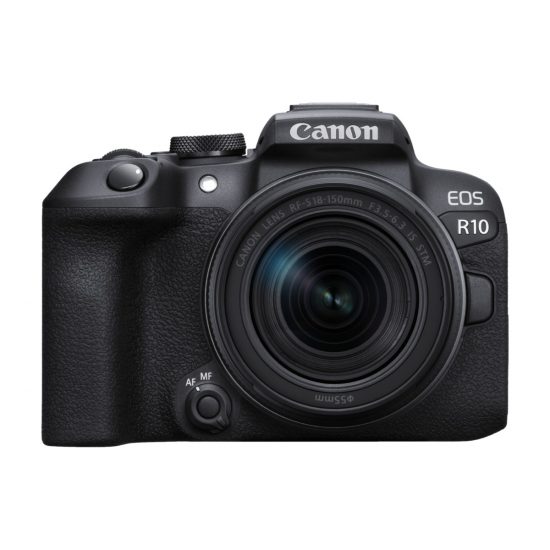 This product from Canon is one of their best attempts at a perfect blend of effectiveness and size. Sporting a 24.2MP APS-C sensor, the Canon EOS R10 produces high-resolution images in moderately sized files. In addition, this camera’s performance in low-light scenarios is impeccable, requiring just some ISO adjustment while creating low-noise images.

It won’t come as a surprise to say the Canon EOS R10 records in 4K, while you can also get an oversampled video resolution of 6K. Other features like external recording for unlimited recording time, 10-bit recording mode for more image detail, wireless connectivity for easy file transfer, and a free-tilting angle high-resolution monitor, among other excellent features, stand this camera out from the rest. 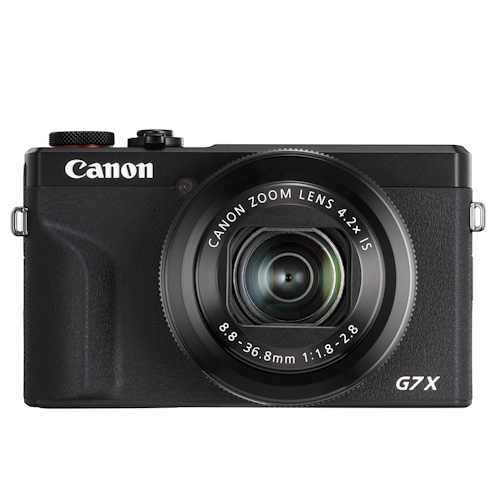 This camera is unique. First, it uses a 1” stacked CMOS sensor, smaller than the APS-C and MFT sensors, and doesn’t use an interchangeable lens. These combined features result in one of the most miniature and effective cameras for blogging.

Like every other top Canon camera, it records in 4k at 30p and can record at lower resolutions with increased frame rates. In addition, the Canon Powershot GX7 Mark III uses advanced focusing to track the subject’s face while offering exceptional image stabilization for handheld shoots. Although this Canon camera has drawbacks, like the recording time, which is less than 30 minutes, it is still one of the best Canon cameras for vlogging, especially if you are moving. 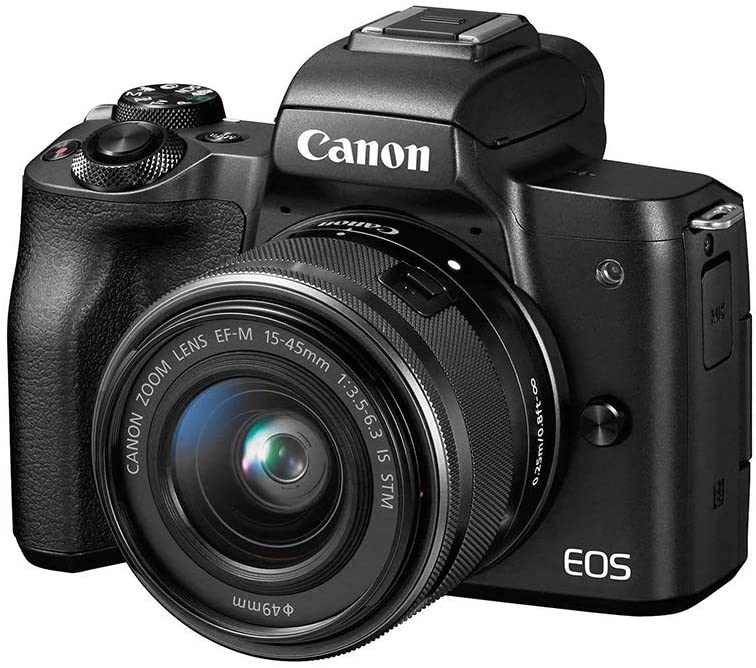 A budget shouldn’t be detrimental to enjoying quality, so I have included the Canon EOS M50 in my list of the best Canon cameras for vlogging. Like other cameras on this list, the Canon EOS M50 has 4K capabilities, thanks to its powerful 24.1 MP sensor, which helps produce clear video images even at low resolutions that rival the best cameras.

An external recording is available for extended recording periods while you get to record in the widely accepted H.264 format. The focus on this camera is relatively fast and accurate, thanks to the 99-point phase detection. Keeping up with technology, this camera comes with Wifi for easy uploads and connectivity to storage devices. 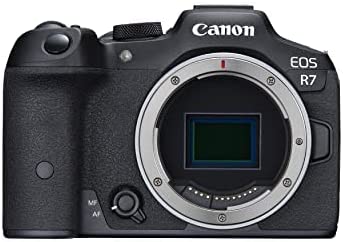 The Canon EOS R7 is one of the most potent mirrorless cameras. It can record 4K at 60p, making it a unique pick among others on this list. Thanks to the 32.5 MP sensor. In addition, users get to record videos in cinema-standard formats.

With this camera, you can enjoy detailed imagery and monitoring thanks to the top-notch viewfinder and screen. Users also can record larger files due to the availability of two memory card slots, while you can output the videos directly to the internet via the IP streaming feature.

Noting your Canon camera’s video and audio recording formats is very important, especially if you want to upload the videos to different platforms. 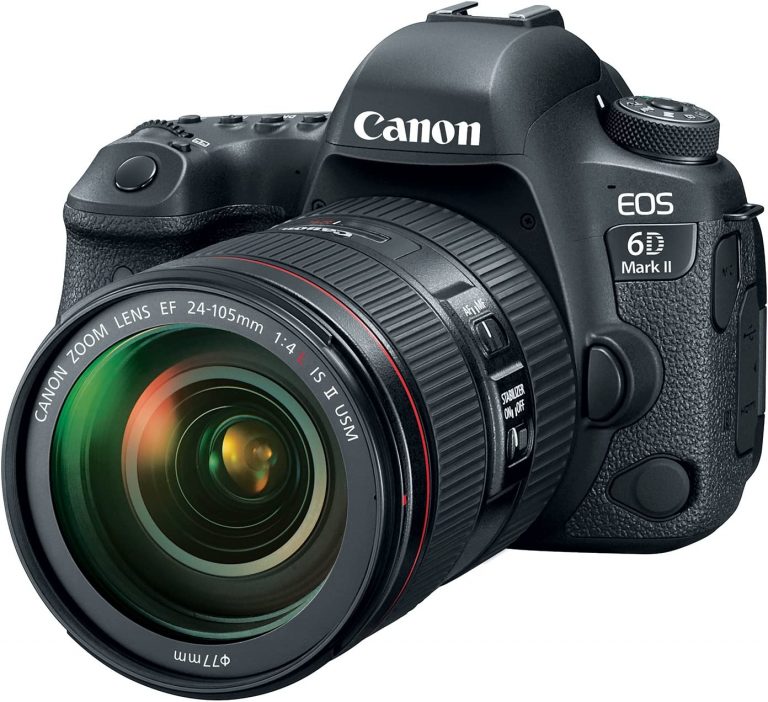 This pick is for those partial to Canon’s DSLR cameras. The Canon EOS 6D Mark II is a phenomenal machine that works in any environment. One of the stand-out features is the extensive ISO range which gives users much freedom to experiment. Also, while it only records in the FHD resolution, the powerful sensor makes the best use of the limited resolution to produce vivid images.

The 5-axis IS ensures you can shoot handheld without fear of shaking appearing during playback. Another outstanding feature is the intervalometer which essentially makes creating time-lapse videos easier. Finally, this camera has impeccable focus.

How to Choose the Best Canon Camera for Vlogging

These features’ quality separates a fantastic Canon camera for vlogging from a bad one. Let’s dive into how each camera feature affects your vlogging video output.

Here are the factors to look for in a Canon camera to be purchased for vlogging:

Vlogging is all about creating videos (1), so it is pertinent to look for some significant video features in a Canon camera before choosing one. As a vlogger, you should be interested in a camera’s video features, such as resolution, frame rates, encoding or format, recording modes,  and the video system. These video features will determine how easy your post-production is going to be. For example, you can not play some video formats on every media device or video platform.

Resolutions determine how vivid your images are, while frame rates determine how smooth your playback will be. Encoding and recording modes show the capability of a camera to record specific formats at a particular resolution at different frame rates. Ensure to check your Canon camera’s specifications for these features.

4K resolution is the rave now and should be the benchmark for vloggers. While older Canon cameras or the cheaper ones may not have this ability, this resolution is perfect because of the image quality you can still retain even after it has gone through edits. You should note that 4K resolution videos can be pretty large, especially with robust camera sensors, and this size can also become an obstacle during post-production.

Several Canon cameras can record in resolutions more remarkable than the 4K. Higher resolutions typically result in cleaner videos, although they may also present a stricter challenge during the editing process. However, as long as clear images in the video are the goal, 4K capabilities should be the minimum requirement.

Camera sensors(2) are classified by size, structure, shutter type, and chroma type. In addition, the camera sensor also controls various camera features like frame rate, resolution, pixel size, crop factor, et cetera. These details on camera sensors are not meant to overwhelm you but to give you an idea of how vital a sensor is to the camera. It determines the quality of your images.

For the most part, many people choose their camera(s) based on the sensor size, with the popular ones being Full-frame, APS-C, and Micro Four-thirds. All these sensor sizes have their peculiarities (price included), and one is not necessarily better than the other. The important thing is to research a camera’s sensor to understand what you will be getting.

Image stabilization is essential in Canon cameras for vloggers as it is needed to compensate for vibrations during video shoots. Except for scenarios where you can use a tripod (which several vloggers are not opportune to), the Canon’s In-Body Image Stabilization (IBIS) always comes in handy. The good news is that Canon’s IS is one of the best in the Camera, with stabilization across different axes. So always look for the IS feature in a Canon camera before choosing one. And if you will be compromising on the camera’s IS, you should complement it with a lens with IS.

The Autofocus feature in a Camera is key to making awesome videos. The speed and accuracy of a camera’s AF determine whether the camera is a great one or not. Although I can not start going into the intricacies of Canon’s AF, you should look for sub-features like AF sensitivity, focus modes, focus type, object tracking, face detection, and the AF points. Then, depending on your vlogging type, check the Canon AF’s feature if it suits you.

Except you are making a point by recording without sound, vlogging is a combination of moving images and sound. It won’t come as a surprise to learn that a Camera’s microphone is not efficient enough for sound capture. So, you need to look out for the provision of an external microphone. In addition, you should check out the position on the camera for convenience and the type of sound interface. Please, do not assume, as some cameras use customized sound interfaces. Finally, check the format or encoding in which the camera records the sound.

While weight may not be a primary feature for the regular camera user, it is essential for a vlogger, especially if they have to create content with selfie sticks or just their hands. Fortunately, Canon cameras make moderately sized cameras, but you must consider other factors.

Camera sensor sizes usually determine the camera’s size, which also determines its weight. Another factor is the attached lens; zoom lenses are remarkably heavier than prime lenses. You should also consider mobility and what the camera’s weight will add to your kit weight. So, choosing the best Canon camera for vlogging includes considering the overall weight and portability.

Digital cameras are not known for their long battery life, especially when using video modes. However, there should be a minimum personal requirement that you can look out for in the Canon cameras. It is highly recommended to get an extra battery if you will be recording for lengthy periods at once. Another way to conserve battery is to use external recording monitors whereby the camera’s energy is only focused on being the ‘eyes.’

Which Canon camera is the best for youtube vlogging?

Which Canon Camera is the best for travel vlogging?

The Canon Powershot GX7 Mark III is a good pick for travel vlogging mainly because of its portability and efficiency.

These choices of the best Canon cameras for vlogging are not exhaustive. A few other Canon cameras can fit into this category if you follow the guidelines above.

Picking one camera from the bunch reviewed can be tricky because of their value relative to cost. However, my top choice is still the Canon EOS R10, mainly because of its efficiency in producing great images in moderate file sizes. This feature comes in very handy with editing and uploading.

Do you agree with my list of the best Canon cameras for vlogging? Which of the cameras listed above do you prefer? Please share your thoughts in the comments.