Our Review of the Best Cameras for Music Video 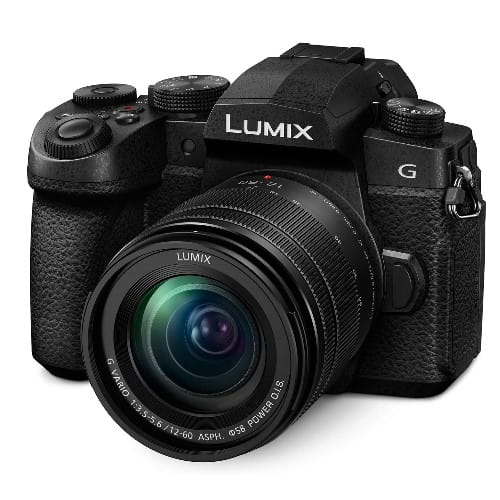 Coming first on our list of the best cameras for a music video is the Panasonic Lumix G95. Being a revered name in the camera industry, Panasonic lived up to its hype with this camera. One endearing fact of this camera is that anyone can use it. I mean anybody from an absolute beginner to a seasoned expert.

With the 4K resolution rapidly becoming the standard for videos and pictures, it is unsurprising that this camera has a 4K video recording feature. In addition, you get an impressive 30fps in 4K resolution that can be extracted into pictures.

Making music videos mostly requires cameras that can perform well in low-light settings. This camera features a lens that takes care of your low-light needs and provides 24x zoom capabilities and fast shutter speeds. Another notable feature is the 5-axis correction technology that compensates for camera movements while shooting, effectively reducing blur.

The high-speed Depth-from-defocus (DFD) and autofocus ensure the camera can pick up your subject(s) from the background in a short time, and there is also the continuous focus stability that is important when shooting videos.

Physically, this lightweight camera is well sealed at the joints for proper protection against splashes and dust. This camera can also be controlled remotely with a mobile app through the Wifi available on it. 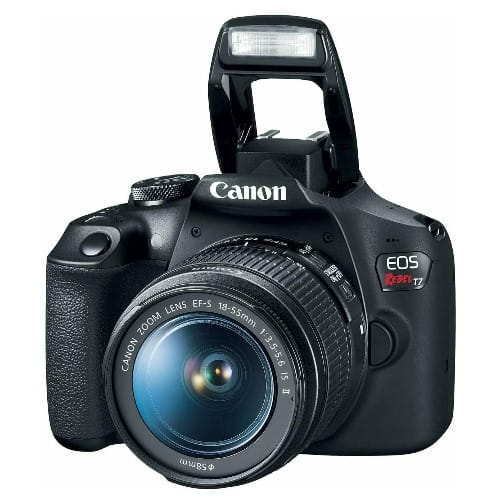 This camera is one of the older Canon EOS series. The Rebel T7 is a DSLR camera that shoots in HD video resolution – the only camera that does not shoot in 4K on this list. Although it does not shoot in 4K, it still deserves this spot as the best budget camera for music video. This camera is perfect for amateurs looking to up their game in videography.

This camera uses the APS-C CMOS sensor usually used by Canon cameras. Accompany this sensor is the DIGIC 4+ processor for smooth operations on the camera. It records in Full HD and can go as high as 30fps during shooting. In addition, this camera can shoot continuously at 3fps.

This camera features autofocus and a manual one and has an ISO range from 100 to 12800, which is quite effective for noise cancellation in low-light scenes. In addition, the Canon T7 features a 3-inch screen size for monitoring your video shoots and has the Wifi feature for easy access to the media.

As the best budget camera for music video, the Canon T7 comes with a full kit that includes memory cards, a camera case, flashlights, a tripod, and many other materials that ease the added cost of procurement against buying them separately. 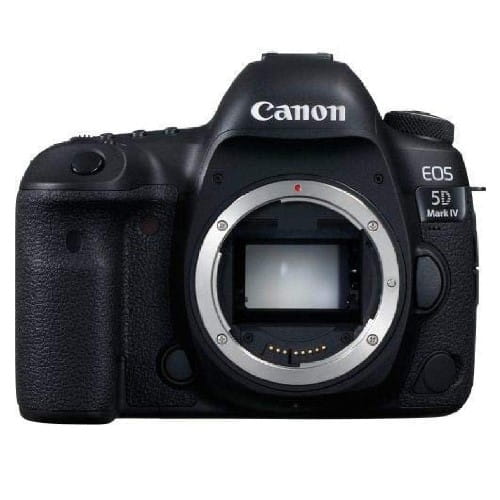 If you are into DSLRs, then you should be interested in the Canon EOS 5D Mark III. Just like the Panasonic brand, Canon also has high standards when it comes to making cameras. Although this beauty attracts a significantly higher price than the Panasonic Lumix FZ300, it boasts a plethora of features that can easily justify the cost.

Like the Panasonic, this camera can also shoot in 4K and Full HD and HD resolutions. However, the different resolutions result in different frames per second; 30fps for 4K, 60fps for FHD, and 120fps for HD. In addition, this camera has continuous shooting of 7fps.

This camera boasts a 30.4 megapixels sensor and has an ISO range from 100 – 32000 for the most explicit low-light pictures and videos. The DIGIC 6 processor this camera uses ensures that you enjoy a smooth operation while using the camera. In addition, the Canon EOS 5D Mark III uses a Dual Pixel 61-point CMOS autofocus for continuous focusing when shooting videos.

You get to enjoy a touch-sensitive 3.2-inch screen at the back of this camera for the most effortless manual focus control. In addition, this camera also provides the option of recording in RAW format for the most vivid visuals. 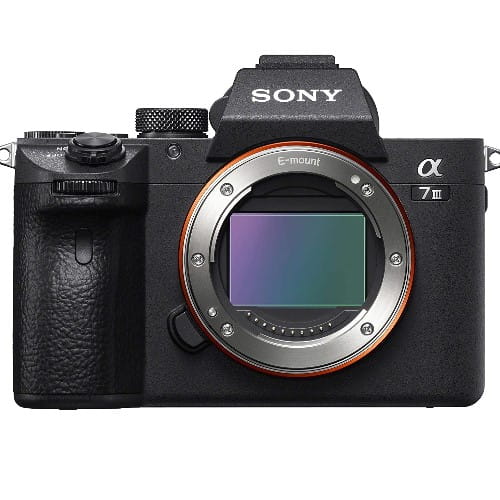 It features an image stabilization technology that helps reduce shakes that you get during video shoots. This camera uses the Exmor R CMOS sensor, a 693 phase-detection alongside 425 contrast autofocus points that cover about 93 percent of the image. In addition, it uses the BIONZ X image processor to give its users the easiest of operability.

The ISO on this camera has a range from 100 to 51200. The amazing thing is that this camera helps focus more on the subject by reducing the background noise, even in low-light scenes. Like the Panasonic product discussed earlier, it also has a 5-axis stabilization that helps to reduce blurriness.

This camera is recommended for professionals, and I can understand why. With this camera, you get 10fps continuous shooting both in RAW and jpeg formats. 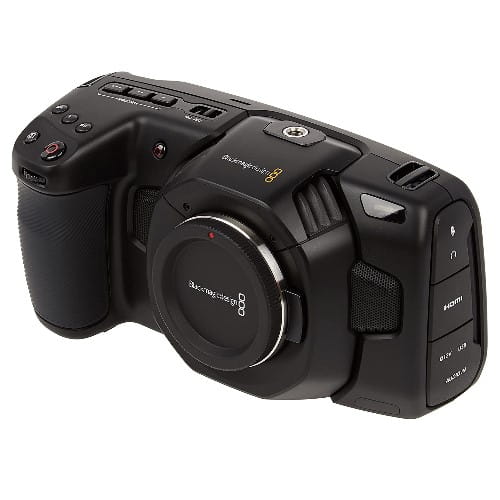 The Blackmagic design cinema pocket camera that shoots in 4K is a kind of camera built for expert videographers and shoots cinema-grade videos – the standard for shooting video in the filming industry – making it perfect for recording awesome music videos.

This camera records an impressive 60fps in 4K resolution, so you don’t have to worry about missing fast-paced movements during shooting. Amazingly, this camera can also shoot in 6K resolution. In addition, this camera gives one of the best low-light performances in the industry with its dual native ISO that is as high as 25600.

This camera uses a Four-thirds sensor and 13 stops of dynamic range to churn out vivid and color-rich videos. In addition, the Blackmagic design cinema pocket camera is compatible with a wide variety of lenses in the industry, making it highly desirable for videographers.

You get to choose what kind of media storage you want to record on with this camera, apart from the option of recording directly to an external SSD through its USB-C port. This camera has a 5-inch screen to monitor video production and has four in-built microphones to pick up sounds. To top it all of, this camera comes with the highly respected DaVinci resolve for video edits.

Your choice of the best camera for a music video will be heavily influenced by the way you want to shoot that particular music video.

How to Choose the Best Cameras for Music Videos

Music videos are a fantastic way to portray the lyrics or the message in a song. The wonderful thing about music videos is that there are a plethora of ways to shoot the videos. Your imagination only limits you. For example, you can decide to do a monochrome shoot for a song or use blurred images to convey some form of message.

With that knowledge in mind, you already know that you can record a music video with various options in cameras. The most critical element here is how you want the music clip to appear, and then you can carry on with choosing your camera.

While I can’t go into the nitty-gritty of choosing the best camera for music videos, there are some basic features you should watch out for when making your choice, and they include:

The sensor(1) of a camera is that part that captures light and converts it into an image we can see through the viewfinder. When talking about sensors, we are talking about the size, resolution, and ISO capabilities.

Camera sensors come in different sizes, with the most common ones being the APS-C sensor and the smaller Four-thirds sensor, while the largest sensor size being the Full frame. For the most part, the sensors reduce in price with their reductions in size.

Image resolution is a representation of how clear an image is. A typical example of an image resolution is the notorious 4K resolution. High resolutions have their pros and cons. The significant advantage to having a high-resolution image is that you can edit the footage without losing much picture quality. You can also zoom and enlarge high res pictures and still get good-quality photos.

Disadvantages of high res pictures or footage include the sheer size and the effect on high ISO ratings. For example, some cameras have a single frame in a video running into 45 megapixels. This problem is being tackled with cameras that can record and save straight to an external storage device.

As with the two features of a sensor mentioned above, more is better. High ISO capabilities usually indicate that the camera sensor can work well in low-light settings. It is not that simple though, as you need a sensor with enough ISO to work in poorly lit areas but can do well enough to reduce noise in the footage. With music videos and the everyday use of low-lighting environments, it will be better to opt for sensors with high ISO qualities.

It’s arguably the next most important part of a camera after the sensor. The lens on your camera brings out the quality of your sensor. One important feature to check out in a lens is the zoom capacity. Not all lenses can achieve high zoom capacities, and that is not bad; you just need to focus on what you need for your video project(s).

Most times, you have to purchase at least one lens with the camera. At other times, brands offer lenses as part of a camera kit. You probably know that lenses differ in their prices as with the different qualities they offer.

With the major talking point of cameras discussed above, you can consider some other features. In addition, this before purchasing the best camera for music videos.

With music videos where the subject is most likely moving around, you need extra autofocus features like continuous autofocus some cameras now offer.

This is the speed at which a camera displays or captures series of images within a time frame. Frame rate is usually represented as Frames per Second (fps). Ideally, high fps are better, and you have options for manipulating your video clip, but high fps or low fps do not directly affect your camera’s picture quality.

If you capture fast-paced videos, then a high fps count is proper for you so that you won’t miss any action.

Unlike the old days, camera brands make sure to focus on the ergonomics of their cameras as much as their functionality. I don’t think anyone wants a scenario where they get blisters from working their cameras. With that being said, potential camera users should check for a review of the ergonomic properties before purchasing.

Some cameras even offer customizable buttons if the user is not convenient with where the function is placed on (in) the camera.

Generally speaking, yes. A high fps count will give you more options during video edits, especially if you intend to slow the video down, but fps ratings do not affect the quality of the image.

Yes, if all other parameters are equal. For example, large sensors take in more light, giving you more detail in the image, but large sensors without the right camera accessories like the camera lens are wasted.

Choosing the best camera for music video is not a walk in the park, but you can always narrow down your choice to fit into the kind of projects you do undertake. Of course, quality cameras usually attract a higher price, but you don’t have to go all out when making a music video since music videos can be made in any form.

The cameras on this list have their pros and cons, but I prefer the Panasonic Lumix G95 because it can be used by anybody no matter your expertise level. The features are good enough for professionals, but it’s not a strictly professional camera that a newbie will find mesmerizing. Other cameras on this list are top-notch and will serve the needs of many videographers interested in making music videos.

What’s your favorite camera for making videos? Do you agree with my list? Feel free to drop your thoughts in the comment section.